Many years ago, as a young airman, I spent over four years working on Vulcan B.Mk2 bombers. I was in one of the first few batches of new recruits to be dual trade qualified, as an electrical and instrument mechanic, and after training I was posted to RAF Scampton in Lincolnshire. I started working as an electrical mechanic, and nobody in authority seemed to realise that I was also instrument trained, probably because the dual trade idea was so new. I didn't really fancy the idea of working on instruments, with all the 'plumbing' of the pitot-static systems, etc, so I just kept quiet about my extra knowledge, and got away with it until about three or four months before my five years service ended, when other similarly trained airmen began arriving at Scampton.

The Vulcan was a wonderful aircraft, big, powerful, noisy, but also strangely elegant and beautiful. I never got tired of them, even though I was always around them, and I was rather sad when they were finally pensioned off in 1984, so I was very pleased when I heard of the 'Vulcan To The Sky' project a few years ago. Everyone involved with that project in any way seems to have put a great deal of effort into it, and it must have been very satisfying for them when XH558 finally flew again. I don't think I ever worked on XH558, all the aircraft I dealt with being prefixed with either XM or XL, as far as I can remember, but I'm very pleased she is back in the air.

I have now been lucky enough to see her flying several times, and it's always a rather moving experience for me. I'm always grateful to be able to see (and hear!) her roaring overhead, and I know I shouldn't grumble, but there is is one thing about XH558 that really irritates me every time I see her.

Why the hell have they camouflaged her underneath??? 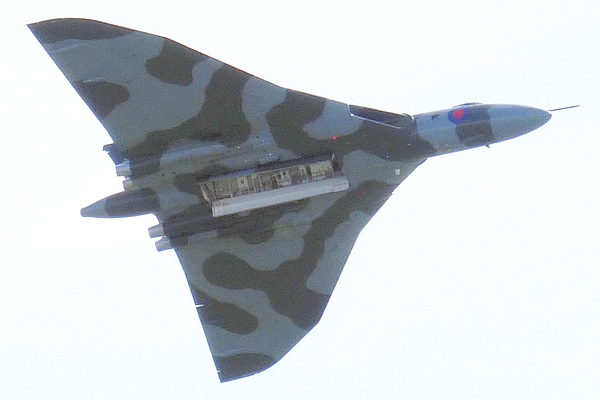 View from below XH558

Vulcans were originally painted all white, to reflect radiation after dropping atomic bombs. Later they were camouflaged on their top surfaces, but remained white underneath. I know this for a fact, because like everyone else under NCO rank, I took my turn on Wash Team, when, using household brooms and buckets of industrial cleaner, we had to scrub the underneath of two or three Vulcans a day. I'm pretty sure I would have noticed if they were camouflaged there. As far as I know they were never, ever, camouflaged underneath.

XH558 is a historic aircraft, so why not keep her in her authentic colours? I'm sure there would be public outrage if the Lancaster, Spitfire and Hurricane of the Battle of Britain Flight were changed in this way, so why ruin the look of this lovely old aircraft?

I'm sorry to make a fuss about what may appear to some people to be a trivial point, when everything else about XH558 is excellent, but I'm sure I'm not alone in finding it irritating.

Come on, Vulcan To The Sky, please paint her white underneath, as she should be. Trust me, she will look even more impressive than she does now!