Back in the 1960s, when I was an airman at RAF Scampton, my interest in model aircraft resurfaced for a while. In a magazine or book, I read about model ornithopters, which really interested me, because they were something different from normal model aircraft. 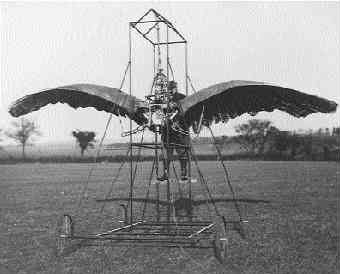 An ornithopter is a flying machine which uses a flapping action to drive itself forwards, rather than a propeller, rocket, or jet. Compared to the more orthodox methods of propulsion, flapping is rather inefficient, but, because we see birds every day, and that's how birds fly, it's how some of the early pioneers of flight tried to get airborne. Human powered flight using flapping wings has still not become truly feasible, although a few years ago the University of Toronto Institute for Aerospace Studies claimed a flight of around twenty seconds, but the aircraft was launched by towing, and didn't take off under its own power. It seems unlikely to me that there will ever be a really successful human powered ornithopter, but who knows what the future may hold? A human powered helicopter flew for over a minute in 2013, although obviously it wasn't an ornithopter, and the propulsion method looks much more efficient than flapping, so we shouldn't rule out any possible future developments.

I decided I would have a go at making a model ornithopter. I gathered balsa wood and tissue for the airframe, rubber bands for the power unit, and carefully bent cranks made from piano wire to push and pull rods connected to levers on the inner ends of the flapping wings. There was no internet full of plans for everything in those days of course, so I built the ornithopter to my own design, with a fixed wing section about 4 inches wide in the middle, to act as the base to hold the wing pivots, fuselage, and everything else in place. A very basic adjustable tailplane was added for stability, and that was it.

The first few flights (yes, it did fly, quite well in fact) took place in my living room, as outdoors was a bit breezy. I then took it to work a few times, and if the hangar was empty I would fly the ornithopter there. This went on very successfully for a week or two, and then - tragedy struck! My dog Scamp, who was normally the most placid animal you could imagine, apparently thought the ornithopter was a pigeon, or some other airborn pest, and ripped it to pieces.

I never got round to building another, but recently the urge to do so has been growing, so who knows, maybe there will be a future article about model ornithopters here. Of course, nowadays I could just go online and buy a radio controlled ornithopter, and you can even download the data for 3D printing the parts for a rubber powered version, but anyone who has ever made a model aircraft from scratch will know there's no satisfaction in doing that.

Sadly, I never took a photo of my ornithopter, so I can't show what it looked like, but here is a picture of the criminal mastermind responsible for its destruction.