Pay a visit to one of the many UFO/Conspiracy Theory forums around the web and you're bound to find claims that the 1969 and later Moon Landing never happened, and it was all faked in a film studio. Supporters of this belief point out 'discrepancies' in a few of the hundreds of photographs and videos taken by the crews, and claim those discrepancies are positive proof that the landing was faked. While most of these people are perfectly genuine in their beliefs, they often simply display a lack of knowledge by making some of those claims.

A claim I have seen raised a few times is, if there's no air, therefore no wind, on the Moon, why is the flag flying straight out? It seems like a fair point, until you actually look at a photograph, or read some of the vast amount of information published by NASA. 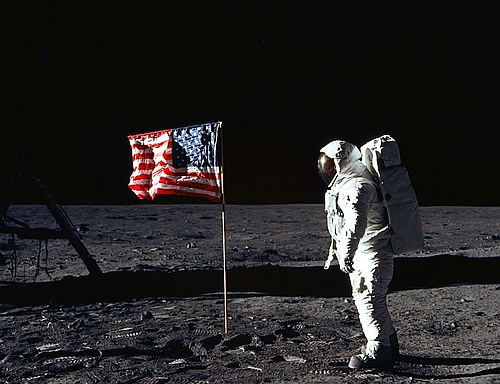 Can you see the flaw in the argument? It's obvious that there is a (telescopic) rod rigidly attached to the top of the flagpole, keeping the top of the flag dead straight. It would be quite a feat for wind to do that anywhere. A related claim says that in videos the flag flutters in the wind. It doesn't.

Another very regular point raised by the conspiracy theorists is that the photos taken on the Moon don't show any stars, and with a totally black sky they should. Have another look at that photograph. Wow, it looks as if they're right this time.

In fact, all the visits to the Moon took place when the landing areas were in lunar daylight. (a lunar day is about two weeks long, as is a lunar night). The light from the Sun is so bright that films in use at the time were unable to record images of the rocks, astronauts, Lunar Module, etc and also show the stars at the same time, and I'm not even sure if modern cameras could do it. I have been a keen amateur photographer all my life, and have an 'A' level in Photography, so yes, I do pretty much know what I'm talking about.

The exposure time and aperture setting needed to form an image of the relatively faint stars on 1960s film would have recorded the stars OK, but everything in the foreground would have been 'whited out', exactly like someone standing too close to a camera when a flash is used. Alternatively, if shutter and aperture settings were correct for the foreground rocks, etc, the stars would not be visible. Hang on, isn't that what happened on the Moon? Oh yes....

The simple fact is, if NASA had wanted pictures of the stars, they had plenty of other equipment to take them without going all the way to the Moon. They had no interest in making sure stars appeared in the Moon photos. They went there to get pictures and samples of the surface of - the Moon!

I'm pretty sure that most people who lived through the 'Cold War' era as I did will have little doubt about the Moon landings. The Russians, or more accurately the USSR, had landed a number of craft on the Moon, photographed the far side, etc, and were perfectly capable of tracking exactly where the Americans were at each and every point in the missions. The same applies to the UK, Australia, and probably every other technologically advanced nation in the world at that time. The whole world knew exactly what was happening because the Americans, unlike the Soviets, announced their launches in advance. Remember that Jodrell Bank in the UK was able to track and receive signals from Sputnik twelve years before Apollo 11 was launched so the technology was certainly available.

Having established that, there is no need to take much notice of the self proclaimed experts waffling on about the supposedly moving flag, the 'missing' stars in the photographs, and all the other similar claims. If there had been the slightest hint that the Yanks were not exactly where they claimed to be, the Russians would have broadcast that fact all over the world within ten minutes! The propaganda victory would have been absolutely massive if they could have shown that the USA had lied. Remember, the whole spaceflight thing on both sides was one giant propaganda exercise, and the Russians were easily winning until 1969. If anyone seriously believes the Russians would have just kept quiet about it then they don't know the history of that era.

As for the USSR being bribed to 'keep quiet' with grain to stop their people starving, I just can't accept that idea! They never bothered that much about their people, not having to worry about ever being voted out of office. Apparently, on 23 April 1967, they launched Vladimir Komarov in a spacecraft, knowing that it was seriously faulty and that they would be unable to return him to Earth alive. This fact seems to have been confirmed by Komarov's close friend Yuri Gagarin shortly before his own death in a flying 'accident' in 1968. There is no way that the rulers of a regime like that could be persuaded to give up the ultimate propaganda victory just to keep a bunch of peasants alive. Sorry, conspiracy theory believers, but I have no doubt whatsoever that the Moon landings took place exactly as the history books claim.

Incidentally, the USSR had their own (unmanned) spacecraft Luna 15 in orbit around the Moon at the same time that Apollo 11 was there. Luna 15 was also being tracked by Sir Bernard Lovell's team at Jodrell Bank, who confirmed its crash landing in the Sea of Crises shortly before Armstrong and Aldrin landed Eagle in the Sea of Tranquility.

Interestingly, the people who claim the Apollo crews never went to the Moon are usually the same ones who claim that the photos and videos taken by the astronauts (when they didn't go to the Moon) show conclusive proof that there are alien bases up there. It must be true, of course, because it says so on YouTube.

Finally, here's a film expert giving his opinion on why the videos taken on the Moon could not have been faked.