It was, as I've just discovered - thanks to Google, Peter Scott Graham who first said, in 1960, that "The Golden Age of Science Fiction is thirteen", although it has often been misquoted as being twelve. I must have read the original quote somewhere when I was a teenager, because although I remembered it as "the Golden Age of Science Fiction ends when you reach the age of fourteen", that means precisely the same as the orginal does.

Mr Graham either knew exactly what he was talking about, or was a lucky guesser, because in my case at least he was spot on. I believe my first experiences of Science Fiction were listening to 'Journey Into Space' on the radio, (I think it was still called the wireless at that time), and reading about Colonel Dan Dare and his sidekick, Spaceman Albert Fitzwilliam Digby in the Eagle comic. I'm not sure which I became aware of first, but both began in the early 1950s, when I was in primary school, and between about five and eight years old.

It wasn't until I was about twelve or thirteen (can you see where this is heading?) that I actually read my first real SciFi book, rather than comics, and I can remember exactly how I got it. A year or two before that I had been given a toy 'ray gun', which was basically a gun shaped torch with red and green covers which could be rotated to cover the light bulb and produce red or green light. A friend of mine, slightly younger than me I think, wanted the ray gun, and offered me a hardback book in exchange, and the deal was done.

I still have that book, although it is no longer readable. The covers got lost years ago, and the pages, being made of cheap 'pulp' paper, are so worn and fluffy at the edges that it's impossible to separate them. The reason for its sorry state is the fact that I used to read that book over and over and over again. Eventually I was about to ask a friend of mine, who is a printer, to guillotine the edges to make the book usable again, when I found a copy at a jumble sale, and a few weeks later I bought another copy, with dust jacket, at a car boot sale, which I'm keeping for when I wear out the other one.

The scruffier copy is now available whenever I get the urge to read it again, which is usually at least three or four times a year. I don't know how many times I have read it, but over about fifty five years or more it must be hundreds of times. I know exactly what happens at every point in the book, but I still enjoy reading it as much as I always have done.

The book is called 'Rip Foster Rides the Grey Planet', by Blake Savage, (Harold Leland Goodwin), and is now available at manybooks.net as a free ebook. 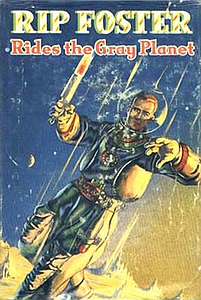 Why was that particular book so fascinating? It was only a 'young adult' science fiction book, but the science was (almost) right. I learnt that a space craft can't zoom here, there and everywhere like a stunt aircraft can, which they do in comics, because in space there is no air for its control surfaces to act on. It just keeps going in a straight line until something pushes it in a different direction, so I learnt about lateral steering jets, and braking rockets to reduce speed when approaching its destination. I also learnt about the effects of high, low, and zero gravity conditions, and at the end of the day, it's a very good story too.

That book led me on to other great SciFi writers of the time. Arthur C. Clarke and Isaac Asimov are the obvious ones, but E.E. 'Doc' Smith and especially E. F. Russell were also welcome finds. Maybe I'll get around to writing about them all one day.