To some people, that may seem a rather strange phrase, but it was in common use until fairly recently, and most people I meet still seem to understand what it means. (probably because most of the people I know are of a similar age to me - i.e. old!) It's normally used in the form "You just do so and so, and Bob's your uncle", meaning "and that's all there is to it", or "it's done". The second part, "and Fanny's your aunt", seems to have been a bit of an optional extra, and was much less common than the plain "Bob's your uncle".

I never had an Aunt Fanny, in fact I never had an aunt at all, but I did have an Uncle Bob. My father was very good at carpentry, gardening, and similar practical skills, and he first introduced me to personal computers in the very early 1980s, when he bought himself a Sinclair ZX81, but it was his older brother Bob who originally sparked my interest in electrical and electronic wizardry, way back in the 1950s. 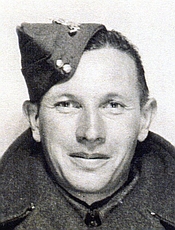 Uncle Bob
Bob was a radio 'ham' before the Second World War, but along with other 'hams' he wasn't allowed to carry on that hobby when hostilities broke out, presumably for security reasons, and I believe he once said that some of his gear was confiscated by the government. During the War he served in the Army in North Africa, and afterwards he built and used various kinds of receiving equipment, including a TV set with a 9 inch screen, which I remember watching. He never went back to transmitting until CB Radio was legalised in the UK in 1981, but that's another story...

I had a wireless set (they weren't called radios then) in my bedroom when I was about nine or ten, which needed a 1.5 volt accumulator for the valve heaters, and a 128 volt battery for the HT side. Uncle Bob used to give me loads of bits and pieces, switches, and so on, and I rigged up loudspeakers for the wireless all over my room, which I could select via a control panel that I built. There were no stereo broadcasts in those days, so the sound only came from one loudspeaker, but it seemed pretty cool (although I had never heard of that phrase at the time) to be able to get that sound coming from different directions. I was still quite young, remember.

I lived on a fairly new council estate at the time, and all the gardens were surrounded by low, two strand wire fences, supported by concrete posts, which my mates and I were able to make use of, again courtesy of equipment from Uncle Bob. With a torch battery and a home made Morse key at one end, and a torch bulb at the other, we were able to send messages to each other, using the two fence wires as conductors, as long as there wasn't a gateway in between. In practice, this meant we only had a range of about sixty or seventy feet at the most, and we were well within shouting range, but we still used the 'more scientific' way, because we could, and the other kids couldn't.

I learnt a lot from Bob, and also from reading various hobby magazines and children's encyclopaedias, which had interesting 'Things to Make and to Do' sections. One day, having read about how microphones worked (in those days), I built a home made microphone using an empty shoe polish tin filled with crushed carbon from torch batteries, and tin foil as the diaphragm, and it actually worked reasonably well, driving one of my many loudspeakers via a battery and transformer. Unfortunately, after a few days the acid gel which the carbon had absorbed from the battery corroded away the tinfoil diaphragm, but it was something else I had learnt.

When I left school, I spent a couple of years working as a gardener/groundsman for the local Education Committee, including during the 1962/63 winter, which was one of the coldest in UK history, then in 1964 I joined the Royal Air Force, and naturally chose to be an aircraft electrician. Five years later, back in Civvy Street, I became a Refrigeration Engineer, and spent the rest of my working life repairing various types of domestic appliances and similar equipment of all kinds, but always involving electricity in some form. Uncle Bob's influence obviously had a big effect on my life, but strangely it's only very recently that I have realised that fact.

I feel rather sorry for children and young people nowadays. They have everything they want, such as mobile phones, computer games and so on, but without even knowing it they are missing out on a lot. Because everything is ready made, they never have that pleasure that comes from learning how to make something, and then making it yourself, and finding that it actually works! I always found there was a great thrill in that, and still do today. Without Uncle Bob I might not have had that pleasure.

Incidentally, while trying to find the origins of the phrase "Bob's your uncle", I found this site which deals with various words and expressions, in both British English and American English, and is well worth a look if you're interested in words and their usage.