I've got this habit. It annoys me when I realise I'm doing it, so it sure as hell must annoy other people.

If I think someone has said or written something that I consider is incorrect, which means it is, (see, I'm doing it again), I have to point out that error, usually at great length. I don't do it to put them down, I genuinely think I'm helping them, which I obviously am, (stop it), but of course they might not want to be helped.

Here, on my own site, it doesn't matter much. If people don't like what I write they are free to leave, but I have recently joined a couple of good, well supported forums, and I don't want to make the same mistake there. I have already noticed that some of my posts are more like short stories, so something has to be done about it. The question is, what?

When I make a point, I try to give a short, hopefully interesting, reply to whatever has been said before. I type it in, and as I always do, I read it again, and check for spelling mistakes and grammatical errors. While re-reading the comment, I notice I haven't been very clear about a particular item, so I add a few extra words to clarify it. I then read it again to check for spelling mistakes and grammatical errors, and the cycle repeats itself until my comment is about half the length of 'War and Peace'.

I can't shorten it, because it would again become unclear, so at last I hit the 'Post Comment' button. This process has taken about twenty minutes so far, and the conversation on the thread has already moved on without me. Of course, the second I hit the button, I realise I've left out a comma, or a question mark, or whatever, and have to edit the post.

On one of the forums I joined, Gibby's Place, there is a thread called 'What are your goals for the next twelve months', and that got me thinking about this problem that I have. As soon as I finish this short ramble, I'm going to add a goal for myself on that thread - 'Learn to say less and listen more'.

Will it have any effect? Probably not, but it's worth a try. 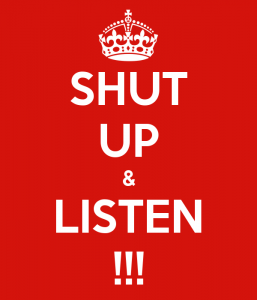