My first computer, a Sinclair ZX81, had 1Kb of RAM (memory) which wasn't even enough to be able to print a complete screen full of characters. 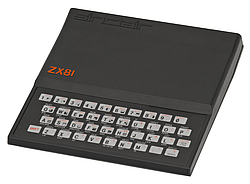 Sinclair ZX81
I bought a 16Kb RAM pack, and I thought that was all the memory anyone would ever need. I later bought a Sinclair Spectrum, with colour! sound! and 148 Kb of RAM. It wasn't possible to use half of the memory, there was so much. I also had a Commodore 64, again with colour, sound and 64Kb of RAM. My last computer before I finally bought a PC was a Commodore Amiga, which with an extra RAM pack gave me, if I remember correctly, a whole Megabyte of RAM, and a Disk Drive.

Nothing was actually stored on any of those computers, it all had to be saved and loaded to and from cassette tape. That was a risky business, because the Sinclair machines didn't come with a dedicated tape deck, so I had to use an audio tape deck, and saving data was always dodgy, especially on the ZX81, which had no Verify facility.

I can still vividly recall the anguish I felt when, having spent weeks writing a machine code compiler to use with the Spectrum, and finding that it was finally working perfectly, I accidentally overwrote the tape with it on, with something else I needed to save. Aaaaarghhhh! I didn't even try to rewrite the program, I just went out and bought a compiler instead.

The Commodore tape deck was generally reliable, but painfully slow, and one game I had took twenty minutes to load. Yes, 20 minutes. In the end I bought a disk drive for it, and a hacking gadget that allowed me to break into and stop the programs, so I could save them to disk. Wow. That was Heaven. Only a minute or two to load and save stuff.

My first PC, running on Windows 98, had 2Gb of internal storage space. No need to load anything from tape, all the programs and data were stored in the computer itself, and if I really wanted to, using the built in hard drive I could store 1.4 Mb on a single disk. Just to keep an idea of the difference, the 2 Gigabytes on that PC was 1,953,125 kilo bytes, so there was 1,953,125 times as much memory as in the ZX81. To keep it simple, it had roughly 2 million times as much memory as the ZX81. It was surely impossible to use that much memory, wasn't it? Actually, no.

My current PC has 3.5 Terabytes of storage, and I also have a 1 Tb external hard drive which I use to store backups of as much as I can. The internal memory alone is roughly 437,500,000 times as much as the ZX81. That's amazing! Even more amazing is the fact that I'm still running out of space! Buying a 16 Megapixel camera has a lot to do with it. Converting all our family photos and videos to digital format is another reason. Downloading literally hundreds of old time radio programs, and dozens of TV programs doesn't help either. All my CDs have been converted too, and the originals put in the loft, along with all the old photos and video tapes that will never get looked at again.

I suppose having a huge amount of memory in a computer means you aren't so careful about what you store. Like a farmer who nevers throws anything away, because he always has space to store things, you just save everything, including multiple copies of anything important, just in case you haven't already stored it. I've run CloneSpy dozens of times, and it has deleted thousands of duplicate files, but I still haven't found a fraction of them yet. Oh well, I'd better start CloneSpy yet again.