As you may have read in other Rants and Rambles on here, for over a year I visited a forum discussing UFOs and similar subjects, but eventually I left it and walked away. That left me with nowhere online to air my opinions, which I have plenty of - on all subjects - and after a while I decided I needed an outlet for them, before my head exploded. This website is the result. I started with no idea of where I was heading, and the site is still slowly evolving all the time, though perhaps not very noticeably.

I just wrote my first Rant, about the forum I had recently left, put it on a quickly thrown together web page, and that was that. Job done. I had got rid of my frustration, and all was well, for a while. A few days later I added a short Ramble about Ley Lines, a subject which has always interested me, because they do seem to exist, but are not easy to explain. That's my kind of subject.

I posted the first Rant on 5th January 2015, and by the end of January there were eleven Rants and Rambles on here. In February I added another seven to the list, with the last of those being written on the 19th. On the 22nd I joined a forum, and on the 26th I joined another. The next article didn't surface until the 3rd of March. March wasn't a very productive month on here, with only four articles appearing. Somewhere along the line I joined a couple more forums, and I now regularly visit four every day.

As I write this, on the 14th April, there are as yet no Rants or Rambles at all for this month, and it has taken quite an effort to get started on this one. Where has my Ranting and Rambling spirit gone? It took me a while to work it out, but I now know that my enthusiasm for writing articles on here is inversely proportional to the amount I write on the various forums I visit. I have still been doing the same amount of Ranting and Rambling, but for somebody else's 'benefit', although they might not always see it in that light. Because the first thing I usually do when I switch on the PC is visit the forums, by the time I get back here I'm Ranted and Rambled out.

I really enjoy chatting, and occasionally strongly arguing, on forums, and I won't stop doing it, but I will try to get a bit of my own writing done before I head off into Forum Land. So to answer the question in the title of this Ramble, it is good to talk, but not until I have got my own work done. 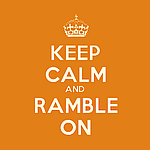