Picture the scene. You're standing outside in the dark, possibly having a fag, which is the most common reason given for being there. 'Talking to' your boyfriend or girlfriend is another common one. In my case I was pushing my bike through the back gate, having ridden home from the pub after closing time. Whatever the reason happens to be, you're outside in the dark, when you glance up at the sky and see a bright star. A really bright star, actually. "That's nice" you might think, followed by "Hang on a minute, it's moving, it must be an aircraft of some sort". Then you notice that it's a steady white light, with no flashing red or green navigation lights, which is a bit odd, and there's no engine noise either.

So you have a steady bright white light in the sky, moving silently at a steady speed, not unlike that at which an aircraft moves. Surely if the aircraft was low enough for the lights to appear that bright you ought to be able to hear the engines, but you can't hear a sound. It's completely silent. You watch the light move across the sky for two or three minutes, and suddenly the light fades out, and whatever you saw has completely vanished without a trace. You may not say anything, especially if you are alone and reasonably sane, but what goes through your mind is something along the lines of "Gosh, what on Earth was that", although you may phrase it slightly differently, using words you probably didn't learn from your mother.

It isn't too hard to work out what you saw, is it? There was a bright light moving silently across the sky, which wasn't an aircraft, and it suddenly disappeared from view in a clear night sky, with no clouds for it to hide behind. There's only one possible explanation, isn't there? You have just seen a UFO. An honest to goodness, genuine UFO, which suddenly, probably because it realised you were watching it, turned on some kind of cloaking screen, and became invisible.

Ye gods, you've seen a UFO at last, but hang on, UFOs don't exist, do they? Work it out for yourself. What else could it possibly be? Perhaps it would be a good idea to report it to someone in authority, but you don't want to make yourself look an idiot if there's a simple explanation, do you? The logical and most sensible thing to do is to report it first on a UFO sightings reporting web site, or a UFO themed online forum, and see what people there think it was. That will be OK, nobody there will make fun of you. You give a clear, concise report of what you saw, with an accurate time for the sighting, aproximately how far it was above the horizon, and even the compass direction the light was travelling in.

Next day you visit the site or forum again and, hey, it turns out was a genuine UFO. Everybody says so. One person, who obviously knows quite a lot about UFOs, because, as he explains, he has seen one close up, thinks it is probably an interdimensional craft from the Seventh Dimension. How cool is that? Wow! A couple of days later you check in again, and there are loads more posts confirming your sighting as a genuine UFO. That's absolutely brilliant, isn't it?

"Hi [add your name here]. That's an interesting report. From the times, height above the horizon, direction of travel, and the other information you supplied, after checking on NASA's Spot The Station website I can confirm that without doubt, what you saw was the International Space Station, which was visible from your location at that precise time, and moving at exactly the height you reported, in the exact direction you reported. The sudden disappearance was when it ran into the Earth's shadow, and the Sun stopped reflecting off its solar panels. Quite simple really, wasn't it? Well done, you have had your first sighting of the ISS"


~~~~~~~~~~~~~~~~~~~~~~~~~~~~~~
That is a pretty accurate example of what happens on a regular basis on UK UFO sites when the ISS is visible from the UK. I have seen those reports, and the comments, and the explanation by someone who knows what he's talking about, and the denials of those explanations afterwards, by the people who believe every strange light in the sky is a UFO. Welcome to the world of UFO sightings.


~~~~~~~~~~~~~~~~~~~~~~~~~~~~~~
It's easy to mock people who are convinced they have seen a UFO, but the International Space Station is a fairly convincing UFO if you don't know what it really is. As I mentioned earlier, I saw it for the first time as I was putting my bike away after cycling home from the pub. I had only drunk two pints, by the way. I saw the bright, silently moving light as described above, and just for a few seconds I thought I might be wrong to be sceptical of UFOs.

With the bike safely in the shed, I went on line and Googled International Space Station, found my way to the NASA Spot The Station website and confirmed what I had suspected a few moments after seeing the light. Having spent a lot of time on UFO websites, I had obviously heard of the ISS, and quickly realised what I had seen.

Since then I make a point of checking when the ISS will next be visible where I live, and go out to watch it if the weather is suitable. My wife, who has absolutely no interest in Space or anything connected with it, also likes to see it pass over, and even if I'm not going be at home she often asks when it will be over so she can go out and see it. It really is a sight worth seeing, and if the conditions are right it can be quite spectacular.

Should it really be a disappointment if what you see turns out to be the ISS and not a UFO. Personally I don't think it should. At any given time there are six crew members on board, male and female, of different nationalities, flashing around the Earth at 7.66 kilometers per second, at a height of about 400 kilometers above the ground. What you are seeing is a fantastic achievement by humans from many countries working together, and it's real. Watch the NASA Spot The Station website, and next time it's visible in your area, if it's a clear night, go out and see it for yourself. I don't think you'll be disappointed. 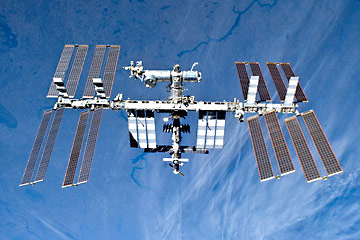