Anyone who drives a car knows how difficult it is to learn to drive. We all had to learn to drive at some point, so we have all held up queues of traffic as we struggled to get the car moving along at speeds approaching fifteen miles per hour. We all understand the problems. There's so much to learn, how to start the engine, how to use the clutch, how to select a gear, any gear, just to get the damned thing moving, without having to cope with cars all around you, rushing to get where they need to be, being held up while you mess about. It isn't easy being a learner driver, especially nowadays, when every day there are more and more vehicles joining the huge, crawling traffic jams already snarling up every city, town, and village in the country, so I think it's about time the government did something sensible to make life easier for learners, and at the same time, for the rest of the road users too.

Why on earth don't they just introduce a law that every new car driver must be capable of controlling the car in a safe manner before they are allowed to drive on the roads? The correct place to learn the basic skills of driving is off the road, in an area where the learner is safely out of the way of fast moving traffic and slow moving pedestrians. The mysteries of the gear lever, and the even more mysterious secret art of using the clutch, would be far more easily and quickly learnt in a quiet area of tarmac set aside specifically for the purpose, rather than in the hurly-burly of rush hour traffic. Learning to reverse around a corner would be much easier and safer in a corner of a quiet car park than on an estate road while women in four wheel drive Chelsea Tractors pick up their little darlings from school, so the poor dears don't have to walk fifty yards to get home.

For some time now new young motorcyclists have had to complete the Compulsory Basic Training (CBT) course before being allowed to ride on the road unaccompanied. The CBT course involves off road training and practicing, and on-road training and riding, with the learner driver moving from step to step when the trainer is satisfied the required knowledge and skills of each level have been learned. When the couse is satisfactorily completed the learner gets a CBT certificate of completion, and can then ride on the road with L plates. If the new driver fails to pass a full motorcycle test within two years from completion of the CBT course, he/she will be required to take the CBT course again. The system seems to work perfectly well for new motorcyclists, who are also limited in the power level of motorcycle they are allowed to drive, so a new car driver, in control of a much larger, heavier, and more powerful vehicle should certainly be given similar training.

Obviously this off road training would be only the first step. The new driver would still need to pass the Theory test, and to be trained in driving on the highway, dealing with other traffic, and all the other problems encountered on the roads, but by then they would have the necessary basic driving skills to at least allow them to handle the car safely, leaving them free to concentrate on learning the other road skills they need to pass the driving test and become fully fledged drivers. 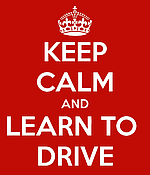