If you asked them if they believed there is life on other worlds apart from Earth, many, perhaps even most people would give you the kind of look reserved for idiots, probably laugh, or at least snigger a bit, and say they didn't believe it at all.

That's fair enough. Most religions always taught that the Earth was at the centre of the Universe, and everything else revolved around it, and until Science came along, a few centuries ago, religious teaching was the only teaching there was. God, in one of his many different forms, depending which religion was doing the teaching, made the Universe and everything in it, and on Earth, the most important part of the entire Universe, he created life, and filled the Earth with creatures of all kinds, including humans. Today, most religions have been forced to admit that the Earth is not, in fact, the centre of the Universe, but apart from that the general view being taught remains the same.

When even the most educated people on Earth had no real idea what the stars and planets actually were, the idea that the Earth was the biggest and most important place in existence was a reasonable assumption to make. The Earth is obviously huge, you can walk for miles and still not reach the end of it. To many people, including a few even today, the Earth was flat, of course, because you can see it's flat, can't you? Actually, the Ancient Greeks had in fact realised the Earth was (roughly) spherical, and way back in about 240 BC Eratosthenes had calculated the circumference of the Earth fairly accurately, but not everyone was convinced.

With modern technology, such as enormous optical and radio telescopes and so on, we now know that the Earth is a minute speck of dust compared to the vastness of the Universe, totally insignificant in comparison even to our own Sun. Our Sun, with a diameter of about 1,392,000 kilometers (about 864,938 miles), which is more than one and a half times the diameter of the Moon's orbit around the Earth, is itself tiny and insignificant when compared with some other stars. (Yes, the Sun is a star, even if it doesn't look like one.) Betelgeuse, in the constellation of Orion, for instance, has a diameter of about 1,641,380,000 kilometers (about 1,019,906,243 miles). The diameter varies a great deal, but can be as much as one thousand times the diameter of our Sun, and if Betelgeuse was where our Sun is, it would engulf the orbits of Mercury, Venus, Earth, Mars and the Asteroid Belt, and possibly even that of Jupiter.

Not all 'stars' are stars, of course. Some are other galaxies, each full of billions of stars. Our own galaxy, the Milky Way, is estimated to be at least 100,000 light years across, and to contain more than 100 billion stars. A light year is the distance travelled by light in one year, and with light travelling at 299,792 kilometers per second (186,000 miles per second) it's pretty obvious that a light year is an extremely long way. So our galaxy, the Milky Way, is unimaginably vast, but it's only one galaxy out of the 170 billion galaxies in the observable Universe. and as galaxies go, it's nothing special.

OK, so we have established that the Universe is a big place, but how does that help us work out if life might exist on other worlds? Given the rough figures I have mentioned, we have 170 billion galaxies, and assuming each one is roughly similar to the Milky Way, so each contains about 100 billion stars, we have an estimated figure of somewhere around 17,000 billion, billion stars in the observable Universe. Astronomers have established that other stars have planets orbiting around them, so we can assume that many, perhaps not all, of those stars have planets. Let's assume that only one in each hundred stars has a planet, which gives us about 170 billion, billion stars that have planets. Some stars, like our Sun, could have several planets, but we'll assume it's only one per star. Let's also assume that it's a billion to one chance that a planet is in a suitable orbit around a suitable star to be habitable by some form of life. We now have 170 billion planets that could sustain life, if it evolved.

Thousands of different types of life have evolved on Earth, so surely it's not impossible for life to appear on another suitable planet, but let's assume it's a billion to one chance of life evolving, even on a suitable planet. That means there are 170 planets out there that have life on them, and that's assuming a 100 billion, billion to one chance of it happening. I haven't exactly fiddled the figures in favour of my argument, have I?

Obviously, whether any of those other life forms living out there are currently visiting Earth in flying saucers is a completely different matter. The vast interstellar distances they would need to travel suggests they aren't, but we can't be absolutely sure. 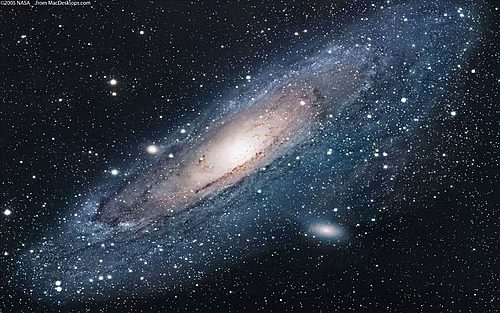 A galaxy, photographed by the Hubble Space Telescope