When I was a child, a lot of people I knew had allotments, but after I had left home, spent five years in the Royal Air Force, returned to Ipswich and set up a home of my own, I forgot all about allotments. Over the years that followed, if I thought about them at all, I assumed they had largely fallen into disuse, with cheap vegetables being available at the various supermarkets which had begun to appear.

My first job after leaving school, and before I joined the RAF, was as a gardener and groundsman working for the local education committee. One of the schools I worked at for a while was a 'Special' school for children with mental or physical disabilities, and the work there was almost entirely vegetable gardening, with the crops being used in the kitchen, to help feed the children. I quite enjoyed the work there, although at times the digging was a bit of a chore, and I did at least learn the basics of vegetable growing. Old Stan, the permanent gardener there, was a grumpy old devil most of the time, but he knew his stuff when it came to vegetable growing. Of course, at the time I was far more interested in Pop music, my new motorcycle, and my girlfriend, now my wife, but some of the knowledge managed to stick in my brain.

When I returned to civilian life after my spell in the RAF, I wasn't the least bit interested in gardening, so my wife and I just did our best to keep the garden reasonably tidy, and that was it. After a few years, I began to grow vegetables in the back garden, and as I had a fairly stressful job at the time, it was a relaxing way of calming down when I finished work. The vegetable growing was quite successful for a year or two, but then we needed somewhere for the children to play, and the back garden was mostly converted to a lawn, with a shed, and a home made greenhouse. Mowing the lawn was easier than digging had been, and the vegetable plot faded from memory after a while.

My wife was always interested in gardening, and enjoyed pottering around, growing tomatoes, flowers and shrubs, all with very little help from me, I must admit. I had absolutely no interest in gardening, and my input was mainly restricted to mowing the lawn, and carrying heavy bags of compost. She even became quite good at laying concrete slabs, I'm ashamed to say, because I couldn't be bothered to do it. She still does most of the work in the garden now, although I try not to let her do any heavy work.

Seven or eight years ago, she suggested we should get an allotment, and it seemed a reasonable idea to me, so we applied for, and were allocated a plot. We found out later that we were probably the last people in our area to get a full plot, because around that time there was a huge surge in interest in allotments, and usually only half plots are available nowadays.

We went to see our plot, to start planning what we would grow that year, and having found it, we stood and surveyed the place where we would soon be growing delicious fruit and vegetables by the barrowload. Ten seconds later we realised that we wouldn't be getting very fat on our own vegetables any time soon. The plot had obviously not been cultivated for at least two or three years, and was a mass of weeds and brambles. The brambles were so high we couldn't even see the far end of the plot, and we weren't immediately aware just how big the plot was. I often wish that we had taken a photograph of what it was like, as it's hard to describe to people just how bad it was. We did consider giving up there and then, before we had even started.

We tackled a small section of the plot, and managed to remove the brambles and weeds, and dug the soil. I can't remember what we planted, or how well it grew, but we had made a start. Slowly, a bit at a time, we cleared the rest of the brambles and weeds, and each year we grew a bit more produce, and now the whole plot has been cleared, and has been rotavated a number of times, although so far we have never had the whole plot completely cultivated and planted. Before I retired, my wife did everything on the plot except the digging, which I had to do at weekends and in the evening. Somehow she always managed to get good crops, especially Runner and Broad Beans, so there was always something in the freezer.

When I retired from work, my employers gave me a rotavator as a retirement present, and that has made a lot of difference, although I still like to fork over the ground first, to remove as much of the weed roots as possible. If that isn't done, the rotavator just chops up and spreads the roots all over the plot, and the weeds grow more than ever. This year the whole plot has been rotavated, but we made a late start for various reasons, so it is not all planted. Hopefully, if we can keep the ground turned over and the weeds under control, next year might be the year we finally produce crops at full capacity. To be fair, we say that every year, and we haven't managed it yet, but it does seem a bit more promising this time, so fingers crossed.

So far this year we have had very good crops of gooseberries, Climbing French beans and beetroot, and a fair crop of rhubarb, carrots and broad beans. The climbing beans are now reaching full production, we have loads more beetroot almost ready, and carrots, turnips, radishes, leeks, cabbages, broccoli, parsnips and butternut squashes are all coming on nicely. In the next month or two we will be sowing broad beans to grow over the winter, which reduces their risk of attack by blackfly.

All in all, I quite enjoy being an allotment holder, apart from the digging, which I find hard going. Once the soil is broken up and ready to sow and plant, it becomes much more interesting and pleasant, and I have far less trouble dragging myself away from the computer. It's pleasant to be able to go there and just potter about, doing a bit of weeding, hoeing or watering, or picking a few beans or whatever is ready. That's the time I'm glad we have an allotment, but on a cold March morning when there's digging to do, I'm not quite so sure. The one thing you can be sure of is that there is always at least one job that needs doing at any time of the year. 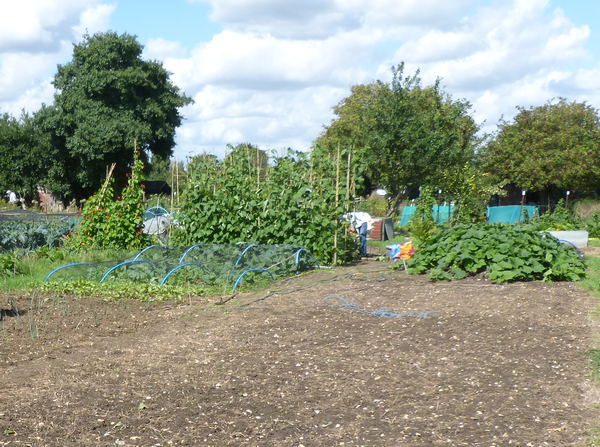 Our allotment in August 2015