Have you ever stopped to wonder how many people have travelled to the Moon and back? How many could you name?

Most people probably know about Neil Armstrong, of course. He was the first man to walk on the Moon, on July 20th, 1969. Some might remember 'Buzz' Aldrin, the second man to walk on the Moon, with Armstrong, though they might not remember that his real name was Edwin. A few people might remember Michael Collins, who was left alone in the Command Module of Apollo 11, orbiting the Moon while his two crewmates made the historic landing down there on the Sea of Tranquility.

So that was it, was it? Three men reached the Moon, and two of them landed.

Well, no, there were other landings, as most people probably know, but what can you remember about them? How many landings were there? Could you name the third man to walk on the Moon, or the fourth?

Hmmm. It gets a bit harder there, doesn't it?

The third man to walk on the Moon was Charles 'Pete' Conrad, and the fourth was Alan Bean, on the Apollo 12 mission. Does that ring any bells? I suspect it probably doesn't, with most people, unless, like me, you're interested in the history of Space Exploration. The Command Module pilot this time was Richard Gordon, by the way, but I don't suppose many people remembered that. I certainly didn't, despite the fact that it's a subject I'm very interested in.

The next Moon mission was Apollo 13. Ah! That might be a bit easier, because they made a film about it, didn't they? Apollo 13 was damaged by a small onboard explosion on the way to the Moon, but due to the nature of space flight, they couldn't just turn around and head for home, because the craft simply wasn't designed to be able to do that. They had to continue their journey to the Moon, flip around behind it, using its gravity to swing them around, and then fire the rocket to drive them out of Moon orbit and back to Earth.

Because of the damage and loss of oxygen caused by the explosion, the crew had to live in the Lunar Module for most of the journey, with various items being jury rigged to make that possible. The LM was jettisoned shortly before re-entering Earth's atmosphere. The good news was, eventually they all made it safely back to Earth, but nobody had landed on the Moon. If you haven't remembered the names of the crew yet, and I couldn't, because I didn't see the film, they were James Lovell, Fred Haise and Jack Swigert, with Lovell and Haise being the men intended to make the landing.

The Apollo 14 mission went according to plan, and Alan Shepard and Edgar Mitchell landed safely on the Moon on February 5th, 1971. Stuart Roosa remained in the Command Module, while, down on the Moon's surface, his crew mates made two Moon walks, and Shepard whacked a couple of golf balls with an improvised golf club.

Apollo 15 was the first craft to carry a Lunar Rover to the Moon, and after a successful landing, David Scott and James Irwin travelled a total of 17.3 miles in the Rover. Alfred Worden was the Command Module pilot, and he was left alone in orbit for about three days, while his comrades were on the Moon.

Apollo 16 was crewed by John Young, Charles Duke and Thomas Mattingly, with Young and Duke making the landing, and Mattingley remaining in the Command Module. Young and Duke travelled a total of 16.6 miles in their Lunar Module, slightly less than the previous crew.

The final Apollo mission to the Moon was Apollo 17, which was the first to carry a professional geologist. Eugene Cernan and Harrison Schmitt, the geologist, made the landing, and Ron Evans stayed aloft in the Command Module. Cernan and Schmitt travelled a total distance of 22.21 miles in the Lunar Rover.

If you've been keeping count, you should know we have a total of 21 men that travelled to the Moon and back. They are Armstrong, Aldrin, Collins, Conrad, Bean, Gordon, Lovell, Haise, Swigert, Shepard, Mitchell, Roosa, Scott, Irwin, Worden, Young, Duke, Mattingly, Cernan, Schmitt and Evans. So that's it, is it? Twenty one men?

Well, actually, no. Before the actual landings, two other Apollo missions had been to the Moon and back, although there were no plans for them to land. On May 22nd, 1969, Apollo 10 crew members Thomas Stafford and Eugene Cernan did a 'dress rehearsal' of the landing, travelling to a point only 8.4 nautical miles from the Moon's surface, before returning to the Command Module, where John Young had been waiting alone. Cernan and Young later returned to the Moon, and both made landings, so we can't count them again, but we have to add Stafford to the list, bringing the total to twenty two.

The only other Apollo mission to the Moon was Apollo 8, which made ten orbits of the Moon. The crew made a television broadcast on Christmas Eve, 1968, during which they read the first ten verses of the Book of Genesis. That crew consisted of Frank Borman, William Anders and James Lovell. Lovell must have considered himself rather unlucky, because although he returned to the Moon later, it was on Apollo 13, so despite making two trips there, he never landed on the Moon.

Borman and Anders give us two more names to add to the list, making a total to date of twenty four men who have seen the far side of the Moon, with the crew of Apollo 8 obviously being the first to do so.

There were two other Apollo missions related to the Moon landings, but both were carried out in Earth orbit.

Apollo 7, launched in October 1968, was the first manned Apollo launch, and was crewed by Walter Schirra, Walter Cunningham and Donn Eisele.

Apollo 9, crewed by James McDivitt, Russell Schweickart and David Scott, carried out the first manned flight, rendezvous and docking of the Lunar Module.

Apollo 4, 5 and 6 were unmanned tests of Saturn V, IB, and V rockets respectively.

There was no Apollo mission numbered 2 or 3. 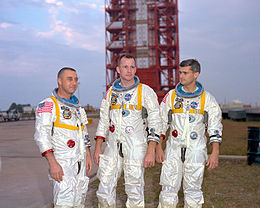 Grissom, White, and Chaffee in front of the launch pad
containing their AS-204 space vehicle